Welcome to the King! In 2009, Dickerman Elementary School merged with the King Middle School as part of the Pathways to Excellence project, which focuses on “expanding academic excellence, increasing access, ensuring quality and improving efficiency and effectiveness.“ After the merger, Jessica Bolt, former Principal at the Dickerman, was appointed principal for the renewed King K-8 School and she has not only helped to change the attitude of the school, but also the look.

Recently, I visited Jessica at the King to talk about the great things taking place at the school. When I arrived, I was greeted by a warm welcoming smile. Jessica was eager to give me a tour of the school. “People don’t know what’s going on at the King,” she said. “They need to come inside and take a look at this great school.”

Jessica informed me about the many programs and partnerships with the school. Massachusetts Housing has been with her for more than 13 years. “Every day we get a mentor who comes to the building to help the teachers and students,” Jessica said. Some other partnerships include Charles Street AME, Wellesley Congregational Church, Harvard University Educational Outreach Program, and Massachusetts College of Art. The partners have assisted with field trips, computers, counseling, books, and after-school tutoring. “We also have many other activities available at the school such as ‘Kings of the King,’ a program that focuses on our young men. We want them to be leaders in the community. We also have Generation Inc. that will be starting up soon. The program brings senior citizens into the classrooms to help with literacy.”

As I walked through the building, I noticed it was clean and well kept. “It is important that kids not only get a great education at the King, but that they are welcomed in a clean environment,” Jessica said. When she says clean, she means spick and span- she stopped three times during my visit to pick up pieces of dropped paper.

During my tour, I took note of the many pictures and quotes. Jessica informed me that a lot of the artwork and quotes on the walls relate to Martin Luther King. Jr.’s vision and dream. “I noticed that the kids liked to spend time mingling in the hallways and I thought I would put some inspiring quotes on the walls to not only give them something to read, but to remind them of Dr. King’s message,” she said.


The students adore Jessica, which is evident when we visited the classroom- Jessica was a recipient of many hugs and smiles.

After the tour we stopped by her office, which is filled with artwork. She tells me that she is an avid art collector and a follower of jazz, which is apparent in the paintings. Also stored in her office are birthday “goodies.” Jessica usually carries it with her while in the hallways. If a student’s birthday happens to fall on the day she is walking the halls, she will distribute a gift to the student. She also acknowledges birthdays of staff members. While in the office, she received a call to remind her of a teacher’s birthday. She quickly makes a note of it so she can recognize the teacher before the end of the day.

I learned more about Jessica while in her office. She has been with BPS since 1978. She is originally from New York, but in 1972 she moved to Boston to attend Northeastern University. After she graduated, she became a middle school reading teacher. From a young age she knew that she wanted to be an educator. She credits her career path to her parents, who were both educators, and to the great teachers she had while attending middle school and high school in West Hempstead, NY. After serving many years as a teacher, she became a principal (she was at the Dickerman School for 15 years before moving to the King).

I wrapped up my interview with Jessica and thanked her for the hospitality. Jessica ended with “No, thank you! I want more people to learn more about the King. I want parents and people in the community to come into the building. I look forward to more visits,” she said.

So if you are in the neighborhood stop by and say hello. Jessica always has a seat ready for you! 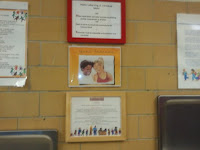 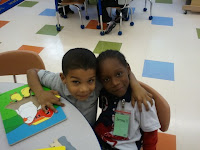 Posted by Thelma DaSilva at 1:49 PM No comments: Links to this post