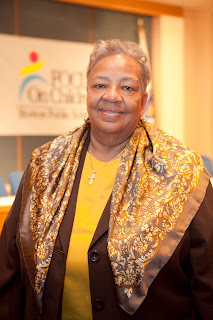 Mayor Thomas M. Menino today joined School Committee Chairperson Rev. Dr. Gregory G. Groover, Sr. and Boston Public Schools Superintendent Carol R. Johnson in congratulating long-serving school committee member Alfreda Harris on being honored by the Basketball Hall of Fame.
Harris, along with Sacramento Kings center Samuel Dalembert and Hall of Fame Coach Jim Boeheim of Syracuse University were named winners of the 2010 Mannie Jackson – Basketball’s Human Spirit Award. The award is presented to individuals who have honored the game of basketball by virtue of their personal growth and life-long accomplishments.
"As the longest-serving member of the appointed Boston School Committee, Mrs. Harris has been my personal guide," said Mayor Menino. "I trust Alfreda Harris: her good sense, her judgment, her straight talk, her values. In everything she does, I know that her top priority is and always has been in the best interest of kids. There are many who claim to make a difference; Alfreda Harris is among the few who actually do. She is the real deal."
Harris founded the SAT Preparation Program serving high school students in Boston while also founding and coordinating girls’ basketball leagues and Amateur Athletic Union teams for the city. Harris also founded the Owen Wells Fitness Center and the Reebok Educational Athletic Partnership that provides students with community programs in social development, computer skills and tutoring. Beyond serving on the Boston School Committee, Harris also serves as a Board member for the Shelburne Community Council, Boston Neighborhood Basketball League and the Police Athletic League.
The criteria for award winners include embracing the core values of the game, hard-work, striving to improve the community and making a commitment to others. Beyond the game, award winners must reflect the values of Mannie Jackson’s life-long mission to overcome obstacles and challenge the status quo, while taking responsibility for his or her actions and seeking the highest standard of excellence.
Read the press release.
Posted by Matt Wilder at 4:41 PM No comments: Links to this post

The Capital Region Society for Technology in Education (CRSTE) named Principal Debra Socia of the Lilla G. Frederick Pilot Middle School in Dorchester a recipient of its first ever “Leadership and Vision” award. The award recognizes leaders in the field of education who have started programs that promote the effective infusion of technology into instruction that reflects the skills, knowledge and experience that are essential for success in the 21st century global economy. After serving as the principal of the Frederick for seven years, Ms. Socia will next year serve as a “principal on assignment” coordinating and expanding Technology Goes Home, a city-wide technology training program serving inner-city families through the Boston Public Schools.

Here is a roundup of some recent press coverage of Deb Socia and the Frederick Middle School:

Intel produced a case study on the Frederick's eLearning initiative.

Ms. Socia has co-authored articles on technology, including “Moving Beyond One Size Fits All With Digital Citizenship,” for the Publius Project at Harvard’s Berkman Center for Internet & Society. She has also been quoted in a New York Times story about cyberbullying and a Wall Street Journal story on laptops in the classroom.

The Robert Wood Johnson Foundation produced a video showcasing a unique mental health program for Somali students at the Frederick.
Posted by Melissa Duggan at 10:44 AM No comments: Links to this post

Former President Bill Clinton and the Alliance for a Healthier Generation recognized seven Boston Public Schools for transforming themselves into healthier places for students and staff. The Boston schools were among 179 from across the country honored at an awards ceremony in New York City.

To earn this award, the schools created healthy eating and physical activity programs that met or exceeded stringent standards set by the Alliance for a Healthier Generation’s Healthy Schools Program, which provides free support and technical assistance to more than 9,000 schools nationwide to help them reverse the national trend in childhood obesity. Schools were eligible for Bronze, Silver, Gold or Platinum National Recognition Awards based on their level of achievement.

For example, moving students out of classrooms and into neighborhood parks helped the Young Achievers Science and Math Pilot School win the Alliance’s “Silver Award.” Science and math teachers identified green spaces within walking distance of the school, transforming urban forests, farms and gardens into learning opportunities. Read more in the press release.
Posted by Melissa Duggan at 10:50 AM No comments: Links to this post

The Boston Red Sox introduced the Red Sox Scholars Class of 2010 in an on-field ceremony with Red Sox players at Fenway Park prior to the Sunday, June 13th Red Sox vs. Philadelphia Phillies game.  The 25 new Red Sox Scholars, who will enter sixth grade in the fall, are all academically talented, financially challenged middle school students in the Boston Public Schools and join seven previous classes of Scholars. There are now 200 Red Sox Scholars supported by the Red Sox Foundation, the official team charity of the Boston Red Sox, including 18 Scholars  in the first class of Red Sox Scholars selected in 2003, who are graduating from high school, and who will be attending college in the fall.
Posted by Melissa Duggan at 12:55 PM No comments: Links to this post

It's graduation time .. for parents! 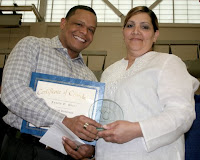 High school graduations are in full swing around the city, but students aren't the only graduates in the Boston Public Schools this year. The district recently honored its very first class of graduates from Parent University. School Committee Chair Rev. Gregory G. Groover, Sr., Vice-Chair Marchelle Raynor, Superintendent Johnson, City Councilor Ayanna Presley, several BPS principals, and other special guests gathered at the Reggie Lewis Center last week for a special ceremony honoring the 86 parents who completed the full program. Parent University, developed by the Office of Family & Student Engagement and launched last October, consists of a series of three day-long learning sessions throughout the year designed to support parents and empower them to become leaders and advocates for student learning and school improvement.
Posted by Melissa Duggan at 5:54 PM No comments: Links to this post

Last week Mayor Menino and Boston Public Schools honored 36 valedictorians from every Boston public high school at the 12th annual Valedictorians Luncheon at the Boston Harbor Hotel. The students and their invited guests enjoyed a three-course lunch, and each valedictorian took home a backpack and gift card courtesy of Reebok.

Several news outlets covered the event, including WBZ-TV, the Boston Herald, and Fox 25. This coming Sunday, the Boston Globe is set to run its annual valedictorians feature, showcasing the top students from all public schools in the city.

Posted by Melissa Duggan at 1:01 PM No comments: Links to this post 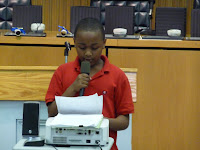 Four students from the Kenny Elementary School in Dorchester also attended the event and read poems, including those they had written in response to the earthquake in Haiti. The students participate in a program with Troubadour, a nonprofit organization that uses poetry, prose and song lyrics to improve literacy and student achievement.

Read the students' poems after the jump.


Read more »
Posted by Melissa Duggan at 3:46 PM No comments: Links to this post