Ellen Latham’s (far right in photo) 8th grade Algebra 1 class at the Gavin Middle School is participating in the on-line First in Math program.  They are currently in First Place for the top team in the city of Boston and the top team in the state of Massachusetts.  First in Math is a math website offering practice on broad math content, with an open-ended, self-pacing design that is great for differential instruction.

The program includes a “competition” component that offers the students sustained, positive motivation.  Christine Hall, Senior Program Director for Secondary Math, provided First in Math accounts for every Boston Public School student in grades 3-8, allowing for hundreds of students throughout the district to correctly solve math problems, earning points that accrue to their personal and classroom score. The program includes math problems that address all Massachusetts state mathematics standards.

Latham says, "My Algebra 1 students yearn for the rigor and challenge of the problems on First in Math, and they love the excitement of competing against friends at other schools for the top ranking."  She adds, "This has been one of my most successful implementations, and I have received a significant amount of positive feedback from parents and families whose children are now using their home computers and Internet access to strengthen their math skills."
Posted by Lee McGuire at 1:05 PM No comments: Links to this post 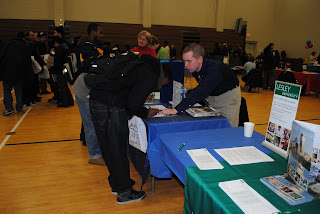 Students who were enrolled in high tech courses were invited to attend the event. There were thirty-eight colleges offering IT-related majors in attendance. In addition, organizations such as TERI, Access, and Success Boston were also present.

During the event students had the opportunity to meet advisers for one-on-one college sessions and to set goals. There was also a 45-minute career-focused presentation by representatives from Microsoft, Cisco and ITA Software.

The students learned that opportunities in the high tech field are limitless!

Posted by Thelma DaSilva at 1:02 PM No comments: Links to this post